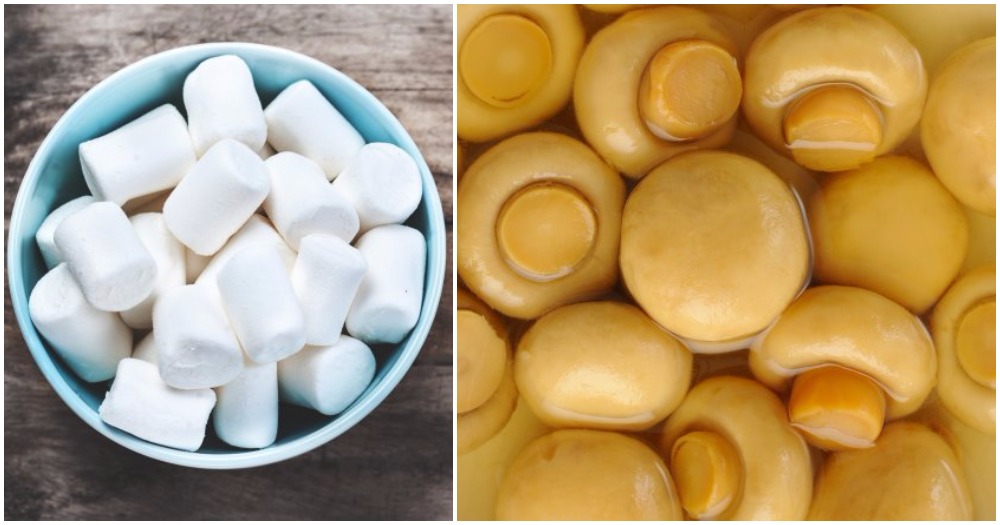 We all know that something tasting good isn’t a guarantee that it’s good for you (sorry to all of you out there with a sweet tooth). What’s less-commonly discussed is that just because something is FDA approved, it isn’t necessarily something you want to put in your body. Here are some of the grossest ingredients found in everyday foods. Proceed with caution; once you learn what’s in some of these foods, you might never want to go anywhere near them again.

You might wonder why vegetarians and vegans avoid marshmallows. They’re not a meat product or a dairy product, but they do have a pretty gross connection to animals. Marshmallows are made from gelatin, an animal protein also found in ice cream and Jell-O.

That doesn’t sound too bad until you look at how gelatin is actually made…by boiling the hides and bones of animals. Yup, that’s right; you’ve been topping off your hot chocolate with cow bones for years.

I, like many people, assumed that shredded cheese was just regular cheese and that the stuff you buy in a bag is exactly what you would get if you shredded up blocks of cheese yourself. It turns out that this isn’t true. Shredded cheese has an added ingredient that isn’t found in blocks or wheels of cheese: wood pulp.

You won’t see those words on the packaging, of course. The official ingredient goes by the name “cellulose” and is added to boost fiber and add creaminess in low-fat foods and to help keep shredded cheese from clumping together. In other words, wood pulp is being added to your shredded cheese to cut down on costs.

Easter candy falls into two major categories: chocolate and jelly beans. If you’re a chocolate lover, your next Easter basket won’t be ruined by this ingredient, but jelly bean fans are in for a nasty shock.

Those gooey bits of goodness are so easy to binge-eat. They’re hard and shiny on the outside and nice and chewy on the inside. How does a jelly bean get so shiny? With shellac, which is a less-gross sounding term for what it really is: lac bug secretions.

This resin is also used to make everything from fingernails to floors nice and shiny. In the past, it was used as electrical insulation and to make records before being replaced with vinyl.

You may expect your beer to be vegetarian or even vegan, but that may not be the case. Many beers are filtered through isinglass, a gelatin made out of fish bladder. While many breweries are starting to get rid of this unsavory ingredient, there’s a pretty good chance that you’ve had this nasty additive swimming with you at some point.

Guinness has slowly been phasing out the use of isinglass and is on track to eliminate it entirely, though the process has been taking longer than expected. To double check whether or not your beer is fish-free, you can check out the Barnivore database which keeps a list of vegan and vegetarian alcoholic beverages.

Since wineries are not required to disclose the ingredients of each bottle, you may never know what you’re really drinking.

You may have heard of pink slime, but did you know that it’s in your ground beef? A lot of supermarkets add this filler made out of ammonia-coated beef trimmings, which lowers the cost of the ground beef, at least for the people supplying it.

You won’t see this ingredient on the label, either; since it’s still meat (its proper name is lean finely textured beef or LFTB), supermarkets are free to dupe the public into thinking they are purchasing fresh ground beef.

7. Pretty much anything with red food dye

If you’re eating something that seems to be unnaturally red, you might want to rethink it. A lot of red food coloring is made from crushed bugs. This ingredient is completely safe and has been used for centuries, but there is a definite ick factor involved. Officially known as cochineal dye, it also pops up on labels as carmine or carminic acid so look out for those words if you want to avoid a serving of dead insects with your food.