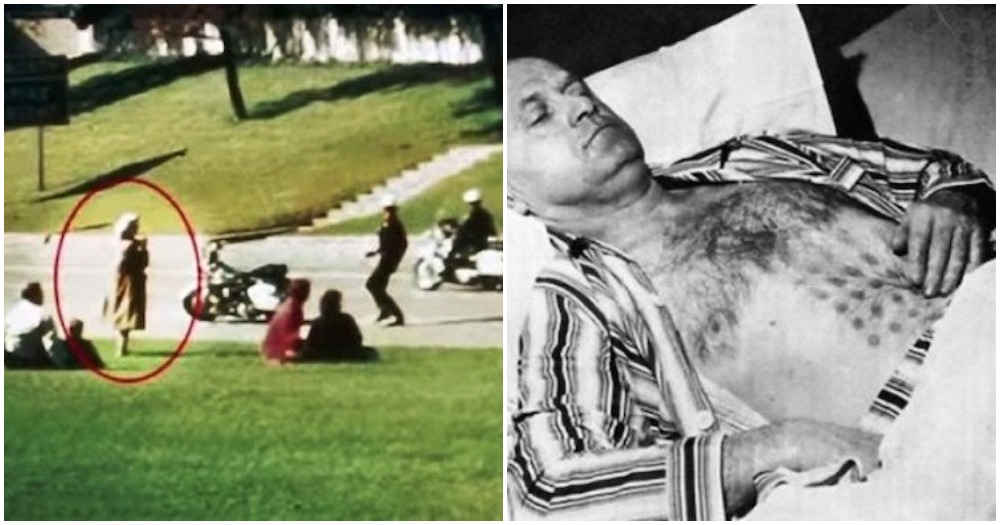 It takes a little time and skill to take a perfect photo, especially when it comes to all those preparation and adjustments that have to be made prior to pressing the shutter button.
Certainly, there are numerous images that photographers casually snapped, only to discover how marvelous they eventually turned out to be.

On the other hand, there are those which are not so breathtaking, but rather creepy and skin-crawling. Check out some of the most mysterious unexplained pictures ever taken.

1.This photo was taken in 1941 at the reopening of the South Forks Bridge in Canada. At first glance, it looks like any other picture from that period in time… But if you check out the details, something isn’t quite right. There seems to be one man dressed in modern clothing among the hats and suit jackets of the 1940s. He also seems to be holding a modern camera, wearing odd glasses and sporting a logo that doesn’t quite fit the time period.

2. In 1964, French photographer Robert Serrec spotted and took a quick picture of what resembles a giant snake-like creature resting on the sea floor off the coast of Queensland, Australia. While some have offered the idea that it’s a giant tarp, no credible explanation has ever been found for this bizarre photo

3. Since the 1940s (and possibly earlier) there has been a strange light phenomenon observed in the Hessdalen Valley, Norway. The spectacle has a form of white or yellow light of unknown origin standing or floating about ground level. Between 1981-1984, the lights were observed up to 20x per week, but have drastically reduced in frequency since then, only appearing about 10-20 times per year. Despite ongoing research and numerous hypothesis, there has yet to be a convincing explanation.

4. As most family would, the Cooper’s moved into their new home in Texas and wanted to take a photograph of the family sitting together. However, as the photo was taken, a body appears to be falling from the ceiling. As the further investigation has brought no plausible explanation, there are many speculations as to what is happening.

5. Nearly all human civilizations have legends of giants, men standing many feet taller than the average with titanic strength. But no fossil evidence has ever been found of one – unless you count the disturbing photographs taken by a man named Gregor Sporri in 1985. On a trip to Egypt, Sporri met an old grave robber who was in possession of a mummified finger measuring 15 inches long – one that would have had to come from a man at least 12 feet tall. Nobody’s ever been able to explain or debunk the pictures he took.

6. Jim Templeton took this photo of his daughter while they were out for the day. At the time of the photo, Templeton didn’t notice anything strange in the marsh area where they were. However, after the film was developed, he noticed what appeared to be a spaceman standing right behind his daughter. There was no one else around when the photo was taken, and Kodak even weighed in, saying that the film was not altered in any way.