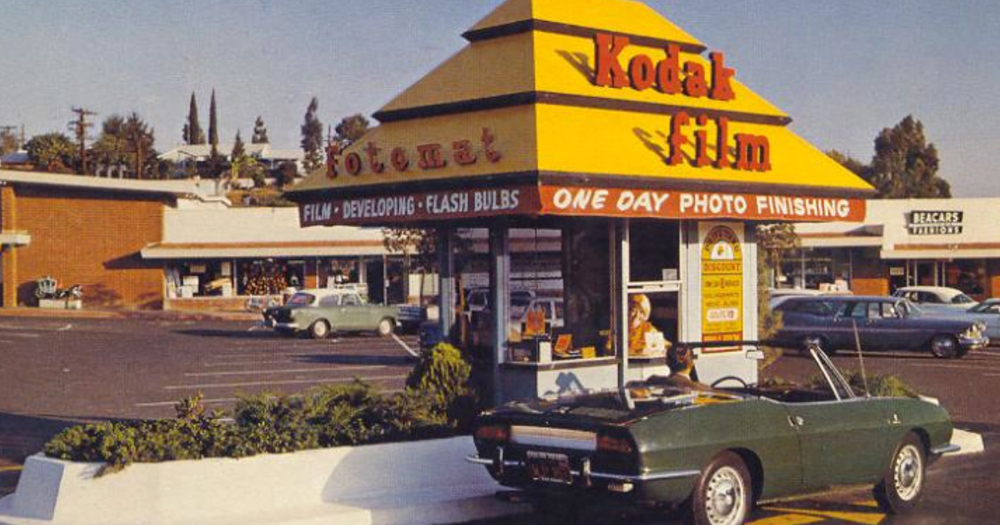 Somewhere in a parking lot near you, there might just be a tiny old shack, perhaps converted into a drive-up coffee stand or some other small business. Chances are, this was once a Fotomat and, in its glory days, was painted a brilliant sky blue with a pyramid-shaped gold roof.

Cars waited in line impatiently, eager to relive their memories of a graduation day, or a vacation, or a baby’s first steps. Fotomats once dotted the landscape of our nation. Then, almost overnight, technology swept in with little mercy and Fotomat became as extinct as the film they once developed.

Drive-thru businesses always seem to emanate from the west, with its prominent car culture, and Fotomat was no exception. It was started in 1965 by a man named Preston Fleet. He envisioned a small store where customers could drive up, drop off their film, and pick up their photos the next day. A simple idea perhaps, but a lucrative one. He opened the first Fotomat in Point Loma, California. A decade later, there were over 4,000 of these little blue shacks across the country.

In the late 70s, Fotomat decided to expand their horizons by venturing into the video rental business. You picked a movie from a catalog, called your local Fotomat to order it, then picked it up at the drive-through. The price was steep, $12 for five days, but there was very little competition, at least at first.

As mom and pop video stores started appearing on every corner, Fotomat’s rental business took a beating. But that was nothing compared to the blow struck to them by the advent of one-hour developing. Suddenly, their promise of one-day developing seemed woefully inadequate, and by the time digital cameras began appearing, Fotomats were rapidly disappearing.

For a kid, Fotomat could be a puzzling place. How did they develop that film in that tiny shack? How did the smiling employee in the blue polo shirt even enter the place? And for that matter, where did the employees go to the bathroom? So many things to ponder while you waited for your film. Then they handed you the envelopes with all those new pictures inside, and in your excitement, you forgot all about those nagging questions … until next time.

What Was Your Favorite Camera?

Previous article: Julie Andrews Wiped Out While Filming The Sound of Music
Next Post: Fleetwood Mac Is Reuniting For A Farewell World Tour In 2018