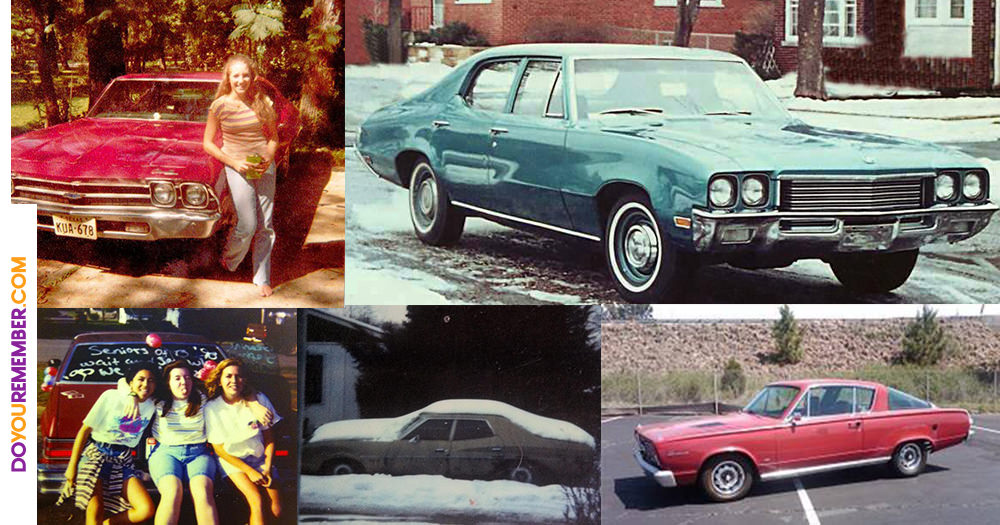 It’s National Name Your Car Day so naturally, at DoYouRemember, we were struck with memories of our first cars. On Facebook, a lot of you chimed in to the conversation. Your feedback is below after the break. Side note: It looks like “Betsy” was the most popular name for a car based on our Facebook friends comments.

Phillip Conybear: Rosie. She’s going through restoration and will be back soon.

Elaine Baker Blythe: I don’t have a photo of mine, but it was a 1963 Chevy Impala ragtop

Susan Vethacke: I posted it before, but this was my first car. A 72 Torino. I have never named my cars, but the older ones have been called a few things.

Paula Ennis: Our family went through many cars. My father was a Buick man. My sister had her Corvair which she named Winston. It was white.

Julia Bridges: My first car was a 1979 Toyota Carolla. I didn’t name it. My current car’s name is Penelope.

Judy Dixon Lambert: My first car was 1964 ford falcon wagon 2 tone white /wood , red & white interior you move your left knee it its a lever an you have intermediate wipers, it was funny, bout from used car chuck Olsen Chevrolet, an paid $220 I Liked that car ★

Marco Bertolacci: My first car? I worked with my dad in the painting business. So when I turned 18 he said he would buy me a car! On my birthday there waiting for me was my car! A station wagon to be used for work. Wasn’t really romantic for the girls going to the driving in with the smell of paint and turpentine!

Noelle Carroll: My first car was a pale yellow ’65 mustang.

Jesi Novinger Potirus: This is what my car looked like her name was Filfulah cuz she was always filthy dirty lol

Karen Watkins Jackson: My first car was an AMC Hornet Eagle. My dad, a car salesman at the time, found it. My car payment was $41.41 and it was in 1978. I don’t remember the year of the car. It was burnt umber, a color I didn’t like, and we had it repainted for my birthday.

Cathy Aldrich: It was 1962 Pontiac catalonia her name was Gertrude.

Robertal Larson: 1965 dodge polara, blue metalic. I loved that car! We called it the Tank, i cryed when it three a rod.

Daniela Buia: It was a little yellow, brown and white stick 2 seater called a “Metropolitan” in 1961…

Sonya Wallace: My husband drove a used Mustang II the years we dated and when we were first married … I named it “Millie”…. Our first car was a used Ford Granada…I named it “Granny”

Chris Semenza-Weidele: My first car that was all mine was a 1979 Chevy Camaro Berlinetta that I bought off my cousin and I loved that car!

Becca Wallace: My first car was a 1966 Pontiac Catalina. I called it a p.o.s., because it was always breaking down!  Lol

Jer Gray: Am I the only one who thinks all these “National (insert random theme here) Days are getting out of hand?

Anne Smith: A35 bought in 1972 goodness knows how old it was SAY 826. I painted it green and for two years went everywhere including around London.£1 filled the tank.Happy days.

Enrique A. Callejas: When Bruce was not Batman yet….lol

Karen N Leigh Fahel: My first car was a green 1972 Plymouth Satellite station wagon that I named Nimitz, after the aircraft carrier. Unfortunately, there is only 1 picture of it in existence, and the person who has it is long out of my life.

Jackie Ward Matz :Pontiac Bonneville, every time we turned with the travel trailer the tail light would poke through the aluminum on the trailer. Never forget that car.

Gary Basehore: My first was a 63 Austin Healy.

Carol Perkinson: I had an early ’60s Metropolitan (Rambler). Don’t think I named it but I remember calling it a few when the brakes went out!! It was a fun little car at the time and would have loved it even more had it been an automatic!

Kay Noell Mine was a used 57 Chevy named blue

Elaine Perry ’53 Chevy Bel Air, dark blue. Never named my cars, it would have made it harder to get rid of them.

Patti Murrish Wright My first car was a 1966 red VW Beetle. Believe it or not I put flower stickers on it.

Dorothy Kelly My sister told me about 40 years ago, try and get your kids to keep their 1st car, it might be tution towards a degree some day. Wish I could have kept my ’59 chevie.

Denise Hall: We have a 1977 Lincoln continental limited addition and it’s name is land yaght  Fits it perfectly

Jack Mays:No photo of mine, but my first car was a 1972 Chevy Impala, aka “The Rusty Ghost!”

Ronald Jaeger: I have a 1973 Beetle convertible

James Boling: A 1937 Ford sedan the gray paint was so faded I called it the gray ghost Johnie Beauchamp’s grandpa loaned me $25.00 dollars so I could buy it

Kendra Brown-Lee :my parents had one like this only red.

Jeff Hannan: My first car was an ugly green 74 Dodge Dart with a bad head gasket that leaked oil like a faucet that I bought for $ 400. I hate working on cars, so I just kept feeding it oil until it ran dry one day on the way to the auto parts store (for oil, lol) and threw a rod through the side of the block. And no, it didn’t have a name, although at the end you could have called it “paperweight.”

Pete Suhovy :1956 Ford F-100 V8, “Sloopy”…. you had to hang on, no seat belts and leaf springs. Bouncing over railroad tracks you’d hit the ceiling if you weren’t holding tight. (Like this one)

Lori Richardson: The first car I remember was a brown panel station wagon; I think it was a Pontiac. All of our cars we named Hercamer. The 1st, the 2nd and the 3rd. All were station wagons!

Leslie Heinle: I always shared a car with my x husbands so my first that i got on my own was a 1999 Hyundi Accent! It was like driving a glorified go-cart! Her namd was BETSY! Living in Vermont, it rusted out by 2011 loved driving it! Great on gas!

Janie Neal: Mine was a 67 Chevelle

Faynette Stadtman :Actually had one exactly like this but all blue. My 1st car was a 1955 Chevy..Candy Apple Green. I have a picture somewhere.